In the first century, Messiah proclaimed these words in Revelation 18:23; “for thy merchants were the great men of the earth; for by thy sorceries were all nations deceived.”

Let’s break down Messiah’s prophetic words to see how they’re being fulfilled today, as Revelation 18 is about events which occur in the end times.

The word ‘sorceries’ in Greek is ‘pharmakeia’ which describes medication, magic, sorcery, and witchcraft; from a druggist, pharmacist. Messiah is warning us about the mRNA-altering CV-19 vaccine from doctors and pharmacists.

Messiah said that it would involve “all nations.” Are all nations involved in the CV-19 narrative? Yes!

Messiah said that all nations would be “deceived.” The great men of the earth who control TELE-LIE-VISION PROGRAMMING and political leaders, know that if they bombard people with fear messages they can brainwash them. They’ve been doing that for the last fifteen months; creating fear messages to persuade, remind, incentivize, coerce, bully, socially shame, threaten, punish and criminalize people.

Dr. Robert Malone, inventor of the mRNA vaccine technology which is being used in the CV-19 vaccines, says that “the CV-19 spike protein is cytotoxic and very dangerous.“ Is the media telling you his perspective? No, they are deceiving us by telling us that it’s safe and effective!

Kary B. Mullis, who won a Nobel prize in Chemistry for developing the PCR test which is being used as the CV-19 test, said that it’s not valid for determining if a person has CV-19 or any virus. Kary proclaims that Anthony Fauci is deceiving people with his evil agenda. Is the media telling you his perspective? No, they are deceiving us into believing that it’s a valid test! Interestingly, Kary Mullis died unexpectedly in late 2019, which conveniently removed his extremely relevant testimony during the CV-19 agenda.

Dr. Michael Yeadon, former VP and Chief Scientific Officer for Allergy & Respiratory Research at Pfizer Pharmaceutical, declares that the CV-19 pandemic is a fraud. He says that “masks are useless, distancing is absurd, PCR tests are meaningless, quarantining healthy people is stupid, variants of virus strains are no threat, and CV-19 vaccines should be rejected.” Is the media telling you his perspective? No, they are deceiving us!

The CDC is deceiving people about CV-19 numbers. The CDC reports show that only 6% of those who are tagged as ‘CV-19’ deaths died from CV-19 flu. The other 94% died from heart attacks, heart disease, sepsis, cancer, etc. Before the CV-19 agenda, 35-50k people died every year in the U.S. from flu complications, but flu deaths magically disappeared on CDC reports and are being reassigned as CV-19 to inflate their numbers. Read CDC is a Privately Owned Vaccine Company (For Profit).

The CDC Vaccine Adverse Event Reporting System (VAERS) shows there have been 22,607 COVID Vaccine Reported Deaths and 1,934,296 COVID Vaccine Adverse Event Reports as of 01/21/22. Most incidences are not being reported to VAERS, so the actual deaths and injuries are estimated to be tenfold. Is the media telling you about this? No! The OpenVAERS Project shows you the current CDC numbers. Here’s a website with the stories of people who have been impacted by the CV-19 vaccine.

Our leaders are deceiving people by proclaiming that it’s the unvaccinated who are causing the new cases of CV-19. The truth is that it’s the vaccinated who are spreading new variants, such as the Delta variant, to others. This is because the mRNA shot is causing their Messenger RNA to continually create spike proteins, which they shed to others who are near them. This causes those with weak immune systems to get sick and potentially die.

Our leaders and the media are deceiving people by hiding remedies. Hydroxychloroquine and Ivermectine reportedly treat CV-19 and they’re cheap, but they’re still from pharma companies. Olive leaf extract contains Oleuropein, which is a natural alternative to Hydroxychloroquine. Why isn’t the CDC providing these to everyone during a supposed pandemic?

In a real pandemic, doctors are not censored for voicing concerns about the CV-19 vaccine. But that is what is taking place on YouTube, Facebook and websites. You can listen to Dr. Carrie Madej, Dr. Sherri Tenpenny, Dr. Richard Fleming, Dr. Lee Merritt, Dr. Richard Bartlett and Dr. Simone Gold @ https://covid.daystar.com

What Messiah proclaimed in the first century is being fulfilled before our eyes, as we witness the great men of the earth deceive the world with the CV-19 pharma-sorcery.

The great men of the earth are using CV-19 narrative to reset the world, to push it into their One World Government. You see this agenda declared in a June, 2020 book called COVID-19: THE GREAT RESET which shows how they’re using the CV-19 agenda to reset our global social, economic, and political systems.

You see their plans on the World Economic Forum website, which outlines an extremely detailed plan to reset the world, based on the CV-19 narrative. Click on the image for a better resolution. 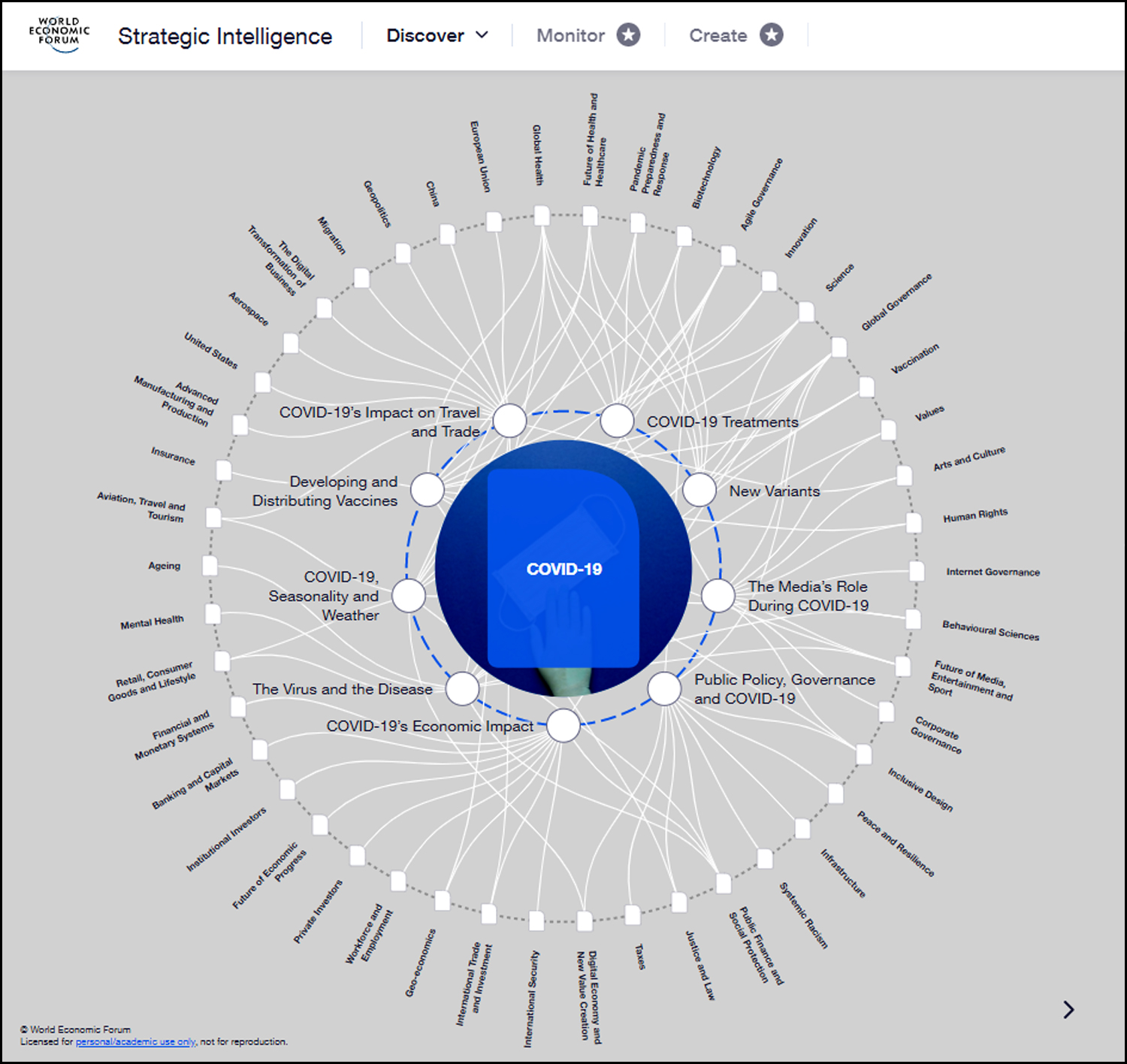 On the World Economic Forum website, when you click on any of the links, the interactive transformation map changes to put that topic in the middle and show all of the connected agendas. They’ve mapped hundreds of global issues and their inter-dependencies together with experts from universities, think-tanks, international organizations, or other research institutions; all of which are based on the CV-19 narrative.

The information on the WEC website took many years to develop as it outlines a global plan to reset every aspect of the world, and it was available shortly after the CV-19 narrative began; showing that the great men of the earth are deceiving the nations with their CD-19 pharma-sorcery narrative, which they planned long beforehand.

Why would they do this? Why would they deceive the nations with a false narrative about a global pandemic? Because the great men of the earth seek to control the whole world in their One World Government. This is what Messiah foretold in the book of Revelation.

We’re in an epic war between good and evil, and the enemy is winning the battle because they’ve brainwashed people using fear messages about a global pandemic. If you didn’t hear the CV-19 narrative repeated constantly on the tele-lie-vision, if you didn’t see any CV-19 signs or people wearing masks, you wouldn’t know that there is a problem; as people die from the CV-flu complications and other ailments every year.

Because most people’s minds have been programmed, they can’t process or accept the facts that are declared on this website. They can’t fathom that .gov, the media and their doctor would deceive them. Watch this ‘How an Entire Population Becomes MENTALLY ILL‘ video.

What can you do to defend yourself and to expose this deception?

Turn off the TV and radio programming which is filling your mind with fear and a false narrative. Get more information about the dangers of the CV-19 vaccine @ Americas Frontline Doctors.

If you’re wanting to create a religious exemption for work or school, here’s an article with some tips.

Focus on enhancing your immune system.

It’s important to get zinc inside the infected cells to potentially destroy the virus. Non-prescription Quercetin (500-1000 mg, twice daily) may help assimilate zinc into the body. Here’s a product with zinc and Quercetin.

You can get a prescription for Hydroxychloroquine and Ivermectine from American’s Frontline Doctors, but since they’re from the pharma-industry, I prefer natural alternatives.

You can buy olive leaf extract, which contains Oleuropein, a natural alternative to Hydroxychloroquine, without a prescription.

NAC: N-Acetyl Cystiene is a precursor to glutathione, which has the best research for potentially neutralizing graphene oxide. Take 900-1800 mg a day. Get it while you can, as .gov is trying to make NAC illegal unless you have a doctor’s prescription.

If possible, avoid getting tested as the swabs may contain harmful substances which are being placed below the blood-brain barrier.

Make sure that you’re getting enough Vitamin D3 and K2, Vitamin C and iodine. Regular exposure to sun causes your body to generate Vitamin D.

Chelate heavy metals out of your body with chlorella, cilantro, zeolites, etc.

Share this website and this one-page summary sheet with others. Your actions may save lives. Here’s a link to a two-page PDF summary of the information on this page that you can save, print and share.

Here’s a link to an alternative two-page PDF summary that doesn’t include the information about Revelation.

Here’s a link to a very informative article called The COVID Agenda & Mark of the Beast Technology By Gary H. Kah

Here’s a link to the Covid 19 Critical Care website

Read the Gospels of Matthew, Mark, Luke and John, to learn about Messiah and how to have a covenant relationship with the Heavenly Father through His Son, whom He sent to atone for our sins; because your spiritual health is the most important aspect of your life.